Samples of my published news coverage from Turkey and the region, focusing on environmental and urban issues as well as civil society and human rights.

“Across the World, Construction Workers are Caught Between Coronavirus Risk and Joblessness” (Equal Times, April 2020)
Governments are asking their citizens to stay at home to protect themselves and others against the COVID–19 pandemic, but millions of construction workers are still on the job, caught between risking their health and losing their livelihoods.
“Turkish Arts Philanthropist Acquitted, Then Detained Again”(Hyperallergic, February 2020)
Imprisoned since 2017, Osman Kavala was found not guilty of attempting to overthrow the government, but re-detained on new charges before he could even taste freedom.

“Controversy in Istanbul Underscores Rising Political Pressures on Turkish Art Scene” (Hyperallergic, October 2019)
A nationalist message from the head of the country’s biggest contemporary art fair stands in stark contrast to limits of expression on other segments of the Turkish art world.

“Turkey: Censorship fogging up pollution researchers’ work”  (Deutsche Welle, September 2019)
In Turkey, rapid urbanization and poor pollution control are impacting public health, according to researchers. They say the government is fully aware, and is punishing experts who've tried to warn the public. [Listen to a radio version of this piece starting at 13:00 on DW's Living Planet]

“The Serious Business of Satire in Turkey” (International Press Institute, August 2019)
Political climate generates both inspiration and anxiety for cartoonists and other humourists.

“Turkey Ploughs on with Controversial €1.2 Billion Dam Project” (Equal Times, November 2017)
A controversial €1.2 billion dam project threatens to displace tens of thousands of people across the Tigris Valley and submerge 12,000 years of history in Hasankeyf.

“TÜMTİS and the Case that ‘Threatens All Trade Unions in Turkey’” (Equal Times, April 2017)
The union that provided a model for labour organizing in tough times is enmeshed in a decade-long legal case that threatens to further erode the rights of all unions in the country.

“'We Want Our Jobs Back’: Turkish Workers Protest Post-Coup Purges” (Equal Times, December 2016)
Tens of thousands of public-sector employees were removed from their posts in Turkey following a failed military coup; many believe they have been targeted for their union activity. 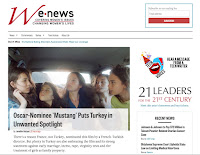 “Oscar-Nominee ‘Mustang’ Puts Turkey in Unwanted Spotlight” (Women's eNews, February 2016)
An acclaimed film by a French-Turkish director is sparking controversy in Turkey over its depiction of early marriage and the treatment of girls as family property. 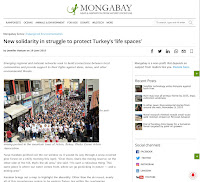 “Rights at Risk in Turkey’s Anti-Terror Crackdown” (Equal Times, August 2015)
Still reeling from a deadly terror attack in a majority Kurdish town near the Syrian border, Turkey’s Kurds say they are targeted once again – this time by the counterterrorism measures their own government has taken in response.

“New Solidarity in Struggle to Protect Turkey’s ‘Life Spaces’” (Mongabay, June 2015)
Emerging regional and national networks seek to build connections between local communities and provide support to their fights against dams, mines, and other environmental threats. 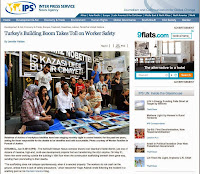 “Turkish Government Bears Down on Rural Resistance to Mining and Hydro Projects” (Mongabay, June 2015)
Villagers in the country’s lush Black Sea region face police force, legal hurdles, and more subtle means of suppression in their fight to protect the environment.

“Turkey’s Building Boom Takes Toll on Worker Safety” (IPS, June 2014)
Safety issues in Turkey’s mining industry have been the subject of a national outcry following the deaths of at least 301 workers in one deadly incident. But the country’s construction sector, which has been a key driver of Turkey’s economy, is no less perilous for workers. 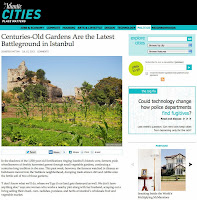 “Centuries-Old Gardens Are the Latest Battleground in Istanbul” (CityLab, June 2013)
Many in Istanbul see the destruction of the traditional market gardens (known in Turkish as bostan) as the latest in a series of assaults on the city’s historic character and unique identity.

“Violence, Tear Gas Greet Protests to Save One of the Last Public Parks in Istanbul” (CityLab, May 2013)
The battle over Gezi Park has become a symbol of opposition to the city's massive urban upheaval.

“Maternity Leave Boost May Backfire in Turkey” (Women's eNews, February 2013)
Amid calls for Turkish women to have more children, a proposal to lengthen the paid maternity leave allowance raises fears that it may actually hinder women’s work force participation.

“Turkish Women Blow Whistle on Rights Crackdown” (Women's eNews, July 2012)
Renewed debate over abortion rights in Turkey has women wondering whether gender equality is being left behind as the country seeks to position itself as a model for the Middle East. 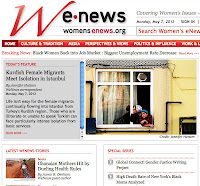 “Women of the World Unite for Rights” (IPS, April 2012)
In times of political and financial crisis, the rights women thought they had secured decades ago are once again under attack.