Some highlights of my published writing on art and culture, food and drink, and travel. 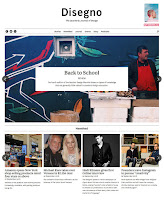 "Once an Istanbul Soup Kitchen, Now One of the World’s Most Beautiful Libraries," (The Daily Beast, July 2020)

With rare volumes stored alongside stone ovens, and students reading where horses were once stabled, the Beyazıt Library has a story to rival any of the books in its collection.

"Weaving a New Future for a Traditional Turkish Craft" (Hyperallergic, May 2019)
A small group of fine artists are bringing renewed attention to the practice of weaving by incorporating it into their artworks.

"Back to School" (Disegno, September 2018)
The fourth edition of the Istanbul Design Biennial draws on types of knowledge that are generally little-valued in standard design education.

"Emerging Artists Look Inward at Istanbul’s Mamut Art Project" (Selections, April 2018)
Unease, loneliness, isolation and self-questioning – along with glimpses of resilience and re-creation – were among the common themes of the annual fair, reflecting the mood in a country that has been undergoing political and social upheaval.

"Artists Fill Six-Story Istanbul House with 672 Hours of Performance Art" (Hyperallergic, March 2018)
The house will become a research space and library in country where performance art remains underdeveloped, and many artists fear persecution.

"Istanbul's Biggest Art Festival Branches Out to Greece" (Lonely Planet, October 2017)
The Istanbul Biennial has taken its own 15th-edition theme of ‘a good neighbour’ to heart, expanding internationally this fall to neighbouring Greece.

"Water Colors" (Morning Calm, July 2017)
The Turkish marbling art of ebru is a delicate dance between paint and water, requiring both speed and skill from the artist. Today, a mix of tradition and innovation is helping to keep this centuries-old art alive.

"An Archaeology of Design" (Disegno, October 2016)
Istanbul plays host to a design biennial that prioritises contemplation and reflection over conventional design objects and processes.

"When Genius Isn't Enough" (Disegno, Autumn 2016)
What makes for outstanding universal value? UNESCO is the guardian of our architectural history, yet inclusion on its World Heritage List is a fraught and bureaucratic matter. The body’s most recent heritage conference, hosted in Istanbul, laid bare these complexities in the contrasting fortunes of Frank Lloyd Wright and Le Corbusier.

"Meet the YouTube-Taught Brewers of Moldova" (October, February 2019)
Eastern Europe is seen as a growth market for craft beer, but up-and-coming Moldovan brewers like Tenemu face many challenges in building their businesses.

Turkey leads the world in cherry production, but the fruit’s role in its kitchens has dwindled over the decades. Now, a culinary rediscovery of this local bounty may be in the works.

"Beyond Baklava" (Fare, May 2017)
To eat in Istanbul, whether its current residents realize it or not, is to taste a broad swath of the world and centuries of history, and the city’s sweets are no exception.

"Spring Gone Wild: Weeds and Edibles in Alaçatı" (Culinary Backstreets, April 2016)
The simple word ot, which translates to "herb" or "weed," doesn't do justice to the important – and delicious – role these wild greens play in the cuisine of Turkey’s Aegean region.

"Layered and Laid-Back" (Morning Calm, July 2019)
The relaxed pace, historic riches and contemporary art and cuisine of Plovdiv are in the limelight this year, as Bulgaria’s second city gets a turn as a European Capital of Culture.

Where to stay, where to eat, and what to do, plus neighborhood mini-guides to Kadıköy, Fener-Balat, and Beyoğlu.

"Destination: Istanbul" (Surface, December 2018)
No stranger to turbulent times, the ever-resilient city is primed to reinvent itself once again.

"Fodor’s Go List 2018 - No. 7: Armenia" (Fodor's, November 2017)
This tiny Caucasus country has an outsize wealth of history, culture, and hospitality.

"My City: Istanbul" (Lonely Planet, September 2017)
After nine years living and working as a journalist in the city, its combination of rich history and kinetic energy continue to captivate, making up for the challenges of living cheek-by-jowl with 15 million-plus other İstanbullus.

"10 Places to Soak Up the Vibe of Istanbul's Kadıköy Neighbourhood," (Lonely Planet, December 2016; updated November 2019)
Artsy, eclectic Istanbullus flock to the city’s once-sleepy Asian side and its lively cafes, galleries, bars, shops, and restaurants. For visitors staying near the historic sights of Sultanahmet, a scenic ferry ride across continents is all it takes to join them.

>> See all articles, listed by date or by topic.