Reporting on the Gezi trial and Osman Kavala 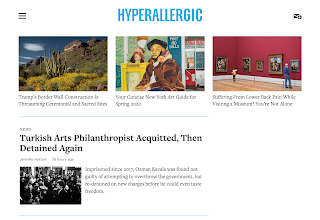 The celebrations were short-lived for supporters of Osman Kavala, a prominent cultural philanthropist in Turkey who has spent the last 841 days behind bars. Just hours after an Istanbul court acquitted Kavala and eight co-defendants on widely derided charges of trying to overthrow the government, he was ordered to remain in detention as part of a previous investigation against him.

“The judiciary in Turkey has lost its independence and its institutional coherence,” Professor Murat Somer, a political scientist at Istanbul’s Koç University, told Hyperallergic. “It is almost impossible to explain what has happened based on legal criteria because this is not about a judicial process, but rather about politics.”

Read the rest of my news report, "Turkish Arts Philanthropist Acquitted, Then Detained Again," on Hyperallergic.