The artist walking between two seas in Istanbul 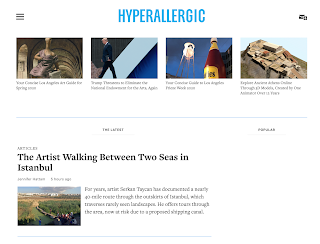 Over the past seven years, artist Serkan Taycan has been walking in the western outskirts of Istanbul, documenting a nearly 40-mile route between the Black Sea and the Marmara Sea that traverses landscapes few locals, and even fewer visitors, ever see. A cave inhabited in Paleolithic times that now sits unnoticed above a highway. A rural village where storks have built dozens of nests atop utility poles and fig trees. Ottoman-era stone bridges. Old lignite quarries that have been reclaimed by nature.

All this, and much more, stands to be swept away by a massive shipping canal, dubbed “Kanal İstanbul,” which Turkish President Recep Tayyip Erdoğan has vowed to build as a new connection between the two bodies of water. An environmental impact assessment report for the canal was approved by his government in January despite serious concerns about the project’s ecological impact.

Read the rest of my article, “The Artist Walking Between Two Seas in Istanbul,” on Hyperallergic.
arts and culture environment hyperallergic urban issues