A view from Istanbul during the #TurkeyCoupAttempt

- July 19, 2016
Glancing at the to-do list on my desk that I’d scribbled just hours before, the scrap of paper seemed to have appeared from some alternate universe too banal to be believed. 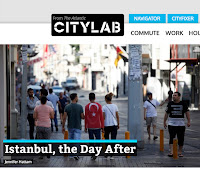 Set alarm for 6 a.m. Take out the trash when I go out for an early-morning run. Bring some money to buy fruit for breakfast on the way home.

Cowering on the entryway floor at 3 a.m. as jets roared past, their sonic booms shaking the building and threatening to break the windows, hadn’t been part of the plan....

As shots rang out outside my window and concerned messages pinged in from friends and family around the world, my editor at CityLab, The Atlantic's website on urban issues, asked me if I'd like to write something about my personal experience of being in Istanbul during what turned out to be a failed military coup.

Read the rest of that essay, "Istanbul, the Day After," on CityLab.

For more on the politics of the coup attempt, its aftermath, and its possible ramifications, here are some news, analysis, and commentary pieces I think are worth a read: