Showing posts from April, 2015
Show all

A place at Turkish table for Armenians, Israelis and more

In Turkey, it’s börek ; in Israel, burekas , flaky layers of phyllo dough stuffed most commonly with cheese, spinach or minced meat. And the savory pastry isn’t the only thing the two cuisines have in common. “You find a vast use of fresh vegetables, greens, spinach, olive oil, light fresh cheese, goat’s milk, and black pepper [in both countries],” says Tel Aviv-based chef Ruthie Rousso. Like Turkey, she noted, “Israel gets most of its fish from the Mediterranean, and enjoys the [same] climate and the produce which comes with it.” Turks and Israelis have few opportunities to revel in their shared gastronomic heritage, however. Political tensions between the two erstwhile allies have been running high over the past six years, with reconciliation attempts thus far unsuccessful. “Many Israelis wouldn’t dare go to Turkey these days. And I believe it’s [true] the other way around as well. What a loss,” says Rousso, who served as a judge on Israel’s version of the “Iron Chef” cookin
Read more 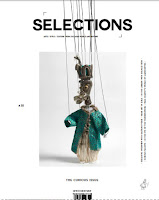 The crystal chandeliers and balustrades of the 19th-century Dolmabahçe Palace soar above the lobby of the Raffles Istanbul, digitally stitched together into a hyper-real photo-collage of ornate architectural details. A full eight metres high, the piece provides a striking focal point for the sleek, airy space, welcoming visitors to a hotel infused with art, and with the city’s history. In making this signature photographic work, French artist Jean-François Rauzier has “transformed reality, and in doing so launches the viewer on a journey into a dream of historic legend and modern fantasy,” says Matthew Whitaker, director of global art-consultancy firm Canvas, which curated more than 200 original artworks for the Raffles Istanbul. “Rauzier’s rich and fantastical photographic composition was designed for the Lobby Lounge as a way to introduce hotel guests to The Dream of Istanbul  and to draw them into the experience, making them feel that they are enveloped by the fascination and
Read more
More posts