Feeding the homeless, and breaking down barriers

- March 13, 2015
“There’s one!” Hearing this cry from within their ranks on a recent late-winter night, the small convoy of cyclists pulled over to the side of the busy boulevard and sprang into action. A keen-eyed member of the group had spotted a florid pink-and-purple blanket inside a brick archway—a tell-tale sign that someone was sleeping rough on Istanbul’s streets. 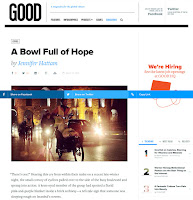 The team quickly poured a piping-hot bowl of pureed lentil soup from a large thermos into a takeout container, topped it with a few slices of bread and a plastic spoon, and left the meal alongside the sleeping figure before pedaling off once again toward the city’s 4th-century aqueduct, in search of more mouths to feed....

It hardly compares to covering conflict or crisis, but as an inexperienced (to put it mildly) cyclist, I had to swallow my fear of taking on Istanbul's busy, chaotic streets on two wheels when I approached the members of Engelsiz Çorba about coming along on one of their late-night rides delivering soup to the city's homeless. I wrote about the experience from a personal perspective for my blog, and then an article for GOOD magazine about this unusual initiative that aims to make cyclists, the disabled, and the homeless more visible on Istanbul's streets.

Read the rest of my article, "A Bowl Full of Hope," on GOOD's website.
good magazine social issues urban issues