Art and the city

- September 02, 2013
Every other autumn is eagerly awaited by art-lovers in Istanbul, as it brings (in the odd-numbered years) the return of the Istanbul Biennial. Now in its 13th edition, the biennial itself varies in the quality of its offerings, but reliably brings with it a host of other art exhibitions and events throughout the city -- as well as the opportunity to peek into some typically shuttered buildings, from historic Greek schools to crumbling hamams. 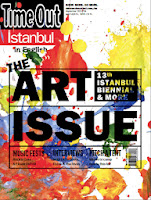 This year's biennial curator chose to focus on the public domain, a decision that both dovetailed with and was made problematic by the Gezi Park protests that broke out this summer, increasing both the anticipation and controversy around the international art event.

As editor at Time Out Istanbul, I spearheaded this year's coverage of the Istanbul Biennial, putting together a cover package that previewed the event, looked at parallel exhibitions being organized around town, and delved into some of the local artist residency programs that are helping develop the city's contemporary art scene. My own written contributions to Time Out's "Art Issue" included:

arts and culture time out istanbul