Showing posts from August, 2013
Show all

A little time at the helm of Time Out

I've just wrapped up a seven-month stint editing Time Out Istanbul , the local edition of the popular international line of arts and entertainment magazines. I spent nine years in the United States as an editor at Sierra , the magazine of the Sierra Club, and this brief return to my roots reminded me of how much I enjoy working with writers and conceptualizing packages -- or entire issue's worth -- of stories that will work together to provide a rich experience for the reader. As the head of a very small team, I also did my fair share of writing at Time Out Istanbul . In addition to our Gezi Park protest coverage in the July issue, and our Istanbul Biennial preview in the forthcoming September issue, these are some of the stories I most enjoyed researching and writing: “ Hidden History ” A stroll through Istanbul’s Byzantine past with Context Travel “ Resisting Nostalgia ” An interview with Turkish artist Ali Kazma on his fascination with transformation “ Literatu
Read more

Amid strife, Turks break fast together for Ramadan 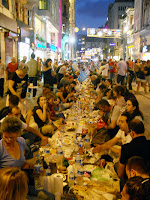 On the first night of Ramadan last month, thousands of people gathered on İstiklal Caddesi in central Istanbul. They laid down newspapers and tablecloths in a long line stretching nearly half a kilometer — then sat down on the ground to break their fast in the middle of the city’s busiest pedestrian boulevard. Passing food and drinks from hand to hand, participants called out to people walking by, “Is anyone hungry? Is anyone thirsty?” and leaped up to distribute water, dates, baklava and other traditional fast-breaking items. As the meal wrapped up, young men toting large garbage bags chanted, “Trash! Trash! Trash!” as they worked their way through the crowd collecting refuse. Ramadan, the month when observant Muslims traditionally fast from dawn till dusk, ended this year on August 7, but not before coming against a backdrop of weeks of street protests in Istanbul and elsewhere in Turkey. The very iftar meal that breaks the day’s fast became a forum for Turkish people to e
Read more
More posts