- March 15, 2013
It’s hard to believe now that Istanbul has become a world-famous tourist destination, but when the Turkish architect Ali Saim Ülgen first visited the city’s historic center as a youth in 1930, its many monuments were neglected, and little-known...

Inspired by the awe he felt on this first visit, Ülgen later became the first architectural restoration expert of the Turkish Republic and wrote one of the era's first books on architectural preservation. But though his influence was widespread during his lifetime, Ülgen today is almost as forgotten as Istanbul’s grand monuments might have been without his intervention.

The Istanbul-based cultural institution SALT aims to bring Ülgen's work back to prominence with the exhibit "Modern Turkey’s Discovery of the Ottoman Heritage: The Ali Saim Ülgen Archive." I interviewed associate director of research and programs Lorans Tanatar Baruh for two articles on this fascinating exhibit, one for Beirut-based lifestyle magazine Selections, the other for Time Out Istanbul.

Read my article "Architect for the Ages" in the Spring 2013 issue of Selections or view the article as a jpg by clicking on the image below.

Read my article "Rediscovering the Past" in the March 2013 issue of Time Out Istanbul. 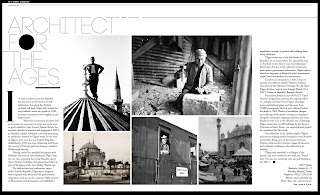