Showing posts from March, 2013
Show all

Sometime in the not-so-distant future, visitors to Istanbul will be able to soar above the Bosphorus, crossing the famous strait on an intercontinental aerial tramway, the city’s mayor, Kadir Topbaş, announced last month. With Istanbul in the throes of a building boom, it’s not the only seemingly fanciful idea that’s been floated recently by a public official. During the 2011 election season, Turkish Prime Minister Recep Tayyip Erdoğan unveiled his self-described "crazy project" to build a second, man-made strait parallel to the Bosphorus. Neither idea has yet reached the actual planning stage, but there's at least one reason not to doubt them: Both Topbaş’s cable car and Erdoğan’s canal were first envisioned by architects and engineers in Ottoman times, along with other equally ambitious building projects­ -- some of which have actually been carried out.... Amid rapid "urban transformation" in Istanbul, it was fascinating to come acros
Read more

It’s hard to believe now that Istanbul has become a world-famous tourist destination, but when the Turkish architect Ali Saim Ülgen first visited the city’s historic center as a youth in 1930, its many monuments were neglected, and little-known... A worker posing on a dome (date unknown), Ali Saim Ülgen Archive Inspired by the awe he felt on this first visit, Ülgen later became the first architectural restoration expert of the Turkish Republic and wrote one of the era's first books on architectural preservation. But though his influence was widespread during his lifetime, Ülgen today is almost as forgotten as Istanbul’s grand monuments might have been without his intervention. The Istanbul-based cultural institution SALT aims to bring Ülgen's work back to prominence with the exhibit " Modern Turkey’s Discovery of the Ottoman Heritage: The Ali Saim Ülgen Archive ." I interviewed associate director of research and programs Lorans Tanatar Baruh for two art
Read more 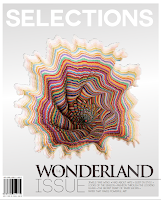 The two great cities fashion designer Serra Türker has called home are reflected in her past-meets-present style, which combines the knowledge and workmanship of Istanbul’s longtime leatherworkers, metalsmiths, and other craftsmen with her sleek, thoroughly modern geometric designs... When Beirut-based lifestyle magazine Selections asked me to do a Q&A with a Turkish fashion designer for the Spring 2013 issue, I followed a tip from fellow Istanbul journalist Vanessa Larson to check out the work of Serra Türker. The Istanbul-born, U.S.-educated handbag designer had recently moved back home from New York to open her first boutique. She cheerfully chatted by email about Istanbul's best and worst qualities, the city's best-kept secret, and her favorite way to spend a day. Read " My City with Serra Türker " in the Spring 2013 issue of Selections or view the article as a jpg by clicking on the image below.
Read more
More posts