A zest for good food and quality journalism

With my latest article, about the Turkish dessert aşure, I joined the contributors' team at Zester Daily, an award-winning online destination for food, wine, and travel journalism. I'll be writing for them at least once a month about culinary culture in Istanbul, Turkey, and wherever else I roam.

Founded three years ago by former L.A. Times writer Corie Brown, Zester seeks to "promote spirited, intelligent dialogue about what we eat and drink." Corie's commitment to an international focus, to professional writing, and to creating new models for funding journalism at a time when all three often seem to be in short supply have me excited to be on board. 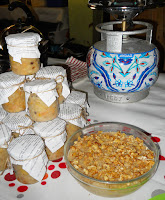 Steam rose from the two heavy pots perched on top of twin cooking-gas cylinders, the scent of orange peels and apples wafting through the crisp morning air at Istanbul’s first organic farmers market. At that moment, the aromatic contents resembled soup, or even mulled wine, but as the hours passed, they would jell into a pudding called aşure, a dish seen by some as the epitome of the Turkish “melting pot.”

A common sight on Istanbul tables in recent weeks, aşure, which some believe to be the world’s oldest dessert, is an unusual blend of savory and sweet. While the base ingredients – wheat, rice, white beans, chickpeas – remain generally the same, each cook has her own repertoire of ways to add what one Turkish friend calls “the excitement”: pomegranate seeds, dried mulberries, lemon peel, molasses, rosewater, anise, or other fruits, nuts and spices.

“It doesn’t matter what you put in aşure. What matters is that you make aşure and share it,” says Şemsa Denizsel, the chef/owner of Kantin, a critically acclaimed restaurant in Istanbul’s chic Nişantaşı district. “You distribute aşure to share the wealth, with the hope of having that wealth again in the years to come.”

By giving away most of the aşure she makes at Kantin to fellow shopkeepers in her neighborhood, Denizsel is following a tradition that dates back centuries.

“The Ottoman sultan’s mother would direct the cooks in preparing aşure, and it would be distributed to the palace inhabitants, dignitaries and the common people,” says Dr. Özge Samancı, a food historian at Yeditepe University’s Gastronomy & Culinary Arts Department. The palace aşure was served in a porcelain ewer and strained smooth, a style still sometimes seen in Turkey under the name süzme aşure.

Aşure is rooted in even earlier pagan traditions related to the harvest season and wishes for future abundance, Samancı added, but the dish encompasses almost as many cultures and beliefs as it does ingredients.

In Muslim countries, aşure is most frequently cooked to mark Ashura, the 10th day of the Islamic month of Muharrem. In 2012, it fell between Nov. 15 and Dec. 13. This date is of particular importance to Shiite Muslims, as it commemorates the martyrdom of the Prophet Muhammad’s grandson Hussein, an event that contributed to the Shiite-Sunni split in the religion. But many Muslims, Jews and Christians in and around the Middle East also believe that Ashura was the date when Noah’s Ark finally hit dry land, and that the grateful survivors of the great flood cooked a dish similar to aşure – often called “Noah’s pudding” in English – out of what was left of their supplies. Many members of all three religions follow suit today, with Armenians, for example, cooking a version of the dish called anoush abour (“sweet soup”) for New Year’s or on Jan. 6, when they celebrate Christmas.

That broad range of rituals and meanings makes aşure a better metaphor for Turkey’s historic cultural diversity than the oft-used “mosaic,” according to Mustafa Avkıran, a Turkish actor and director who has periodically staged a theatrical musical, “Ashura,” since 2004. It features folksongs on the theme of migration in a dozen languages currently or previously spoken in Anatolia, including Turkish, Armenian, Arabic, Greek and Ladino. Each performance ended with – what else? – the distribution of aşure to audience members.

“When making aşure, you melt all these grains and legumes, all these fruits together in a pot – it’s like a society. All these religions, these beliefs; it all goes in this pot,” says Defne Koryürek, the founder of Slow Food Istanbul, who organized an aşure-making (and, of course, sharing) event recently at the farmers’ market for the international Slow Food organization’s Terra Madre Day.

The Terra Madre Day aşure incorporated ingredients from all four corners of Turkey and was made based on Denizsel’s recipe (see below). “My grandmother used to make aşure, but by the time I realized its importance, my mother and grandmother had both passed on, so I had to develop my own recipe,” she says.

That kind of gap is what Koryürek is working to close through Slow Food Istanbul’s latest project, which seeks to create a multi-generational network of (initially) women “coming together in a kitchen around a pot” to share the knowledge about how to sustain ourselves when it comes to food that she says is so often lost in the hustle and bustle of modern urban life.

That bubbling pot of aşure, with all the hands-on work it requires, appears to be the perfect place to start.

“Making aşure takes time; it’s laborious. You need to peel all the chestnuts one by one. That takes many hands,” Denizsel says. “It takes six to eight hours to cook. You need someone to gossip with – that way the time flies.”

Aşure (Noah’s Pudding)
This aşure recipe comes from Istanbul chef Şemsa Denizsel. It was used with permission and translated by the author. Start preparations the night before.

This article was originally published on Zester Daily (RIP) on 26 December 2012.
food and drink zester daily