- July 02, 2012
In the shadow of the Acropolis, they set off before dawn. Men and boys driving rusty trucks, pushing heavy hand-carts, towing wagons behind battered motorcycles. As the city slowly comes to life, they are already well into their day's work, scouring alleys and Dumpsters for old box-spring mattresses, appliances, car parts, anything they can salvage and sell at a scrap yard for a few dollars a day. 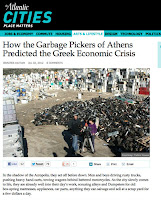 Many Athens residents have been struggling to get by since economic and political crisis erupted in Greece, threatening to engulf much of Europe. But the estimated 80,000 Athenians who collect and process scrap in the city's informal economy were eking out their meager livings back when the rest of the city was still living large...

Back in April, I had the opportunity to watch the new documentary "Raw Material" and interview its director, Christos Karakepelis, as part of the 31st Istanbul Film Festival, which hosted a special series of screenings and talks related to current events in Turkey's tumult-wracked neighboring country, "What's Happenıng in Greece?"

This month, my interview with Karakepelis, a passionate and fascinating filmmaker, became the basis for my debut article for The Atlantic's CityLab (formerly The Atlantic Cities), one of my favorite publications addressing urban issues.