Showing posts from March, 2012
Show all

Sweet-toothed Istanbul residents lined up recently in Taksim Square for a sticky, gooey bite from a 73-meter-long künefe – one meter for every year that the province of Hatay has been a part of Turkey. A popular dessert made with different variations across the Middle East, künefe ’s Turkish version – thin strands of shredded dough encasing a layer of soft cheese, baked and drenched in sugar syrup – reaches its greatest culinary heights in Hatay, a southern province famed for its distinctive regional cuisine. The künefe at the “Hatay Days in Istanbul” celebration was cooked in 43 large round pans, using 172 kilograms of layered pastry, 172 kilograms of syrup, and 85 kilograms of cheese, according to local news reports... Read the rest of my guest post " A Monster-sized Dessert Strikes the Heart of Istanbul " on EurasiaNet's " Kebabistan " food blog.
Read more

Into the wilds of northeast Turkey 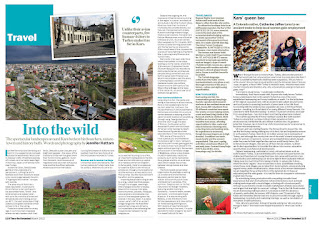 I can feel the small bird trembling as I hold it in my cupped hands and walk outside the weathered metal trailer to release it. Bits of feathers explode off its back as it hurriedly takes flight into the crisp, clean air of remote northeast Turkey. Inside the trailer, Sedat blows gently on the underside of a penduline tit, ruffling the bird’s feathers back from its belly to reveal a tiny round bulge beneath the skin. “It’s going to be a mother,” he says with a smile. The area around Kars has a bleak reputation, in part due to Orhan Pamuk’s dark portrayal in his acclaimed novel Snow . And while winters are indeed harsh, with up to four months of snow and temperatures plummeting as low as -40˚C, the vast landscape of high plateaus and green lowlands comes to life vividly in the spring.... Read the rest of my article about exploring Kars's wild side, which appeared in the March 2012 issue of Time Out Istanbul , as a  jpg  or  pdf , or click "Read more" below for
Read more
More posts