Hiking amidst history in the Southeast

- October 01, 2011
“Here, taste this,” our guide Hüseyin said, plucking a handful of green stems from the ground and offering them to us. The scent and flavor were sharp and unmistakable – garlic, growing wild in the rugged hills behind the town of Hasankeyf in Southeast Turkey. 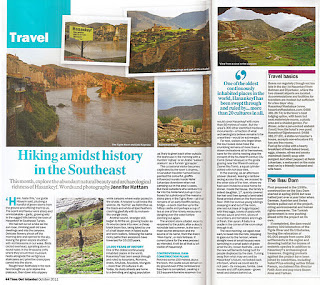 We had set out on a hike as the sun rose, climbing past old cave dwellings and into the canyons. Delicate flowers shook off the morning dew and opened to the sky, leaving the green slopes studded with red blossoms in our wake. Birds circled overhead, spiraling down to round holes in the limestone cliffs where they’d built their mud-dark nests alongside vertiginous staircases and primitive drainpipes carved into the stone....

Read the rest of my article about exploring Hasankeyf, which appeared in the October 2011 issue of Time Out Istanbul, as a jpg or pdf, or click "Read more" below for the full text.

To learn more about this amazing and threatened place, visit the blog Hasankeyf Matters and the website of the Initiative to Keep Hasankeyf Alive. For more photos, see my Flickr site.

TRAVEL
Hiking amidst history in the Southeast
This month, explore the abundant natural beauty and archaeological richness of Hasankeyf. Words and photography Jennifer Hattam

‘Here, taste this,’ our guide Hüseyin said, plucking a handful of green stems from the ground and offering them to us. The scent and flavour were sharp and unmistakable – garlic, growing wild in the rugged hills behind the town of Hasankeyf in Southeast Turkey.

We had set out on a hike as the sun rose, climbing past old cave dwellings and into the canyons. Delicate flowers shook off the morning dew and opened to the sky, leaving the green slopes studded with red blossoms in our wake. Birds circled overhead, spiralling down to round holes in the limestone cliffs where they’d built their mud-dark nests alongside the vertiginous staircases and primitive drainpipes carved into the stone.

Rough-hewn footholds in the rock face brought us up to alpine-like plateaus, then down into slippery white canyons where water pooled in the shade. A hoopoe’s call broke the silence, its ‘hüt hüt’ as distinctive as the black-and-white-striped feathers clashing gleefully with its mohawk-like orange crest.

Another sound, stranger still, began to fill the air, growing louder as its source came into view: a cheap black boom box, being toted by one of a half dozen men in faded suits and worn loafers, following the same rocky paths their ancestors have traversed for 10,000 years.

One of the oldest continuously inhabited places in the world, Hasankeyf has been swept through and ruled by Assyrians, Romans, Arabs, Artukids, Ayyubids, Mongols – more than 20 cultures in all. Today its dusty streets are home to a dwindling and aging population as likely to greet each other outside the teahouse in the morning with a Kurdish ‘rojbaş’ or an Arabic ‘salaam alaikum’ as a Turkish ‘günaydın’.

The occasional visitor becomes captivated by the town’s charms. A Canadian traveller named Daniel painted the colourful, graffiti-influenced murals inside Nehir Lokantası downtown when not camping out in the area’s caves. But most outsiders who venture this far into the hinterland pull up in tour buses for a photo-op of the massive stone piers in the Tigris River – all that remains of an early-twelfth-century bridge – a quick clamber up to the hilltop castle, and perhaps a cup of tea at one of the rickety restaurants dangling over the water before zooming out again.

The ancient stone citadel, recently reopened to the public after a deadly rockslide last summer, is the town’s main tourist attraction and the source of its name, from the Arabic ‘Hisn Kayfa’, or rock fortress. If current plans for the area proceed as intended, it will be all that is left visible of Hasankeyf.

Perched some 100 metres above the town, the castle would remain on dry ground even if the controversial Ilısu Dam is completed, creating a 313-square-kilometre reservoir that would cover Hasankeyf with more than 60 metres of water. But the area’s 300 other identified medieval monuments – a fraction of what archaeologists believe remains to be unearthed – would be submerged.

For now, visitors who linger when the tour buses leave have the crumbling remains of more than a dozen civilisations all to themselves, save for the storks nesting atop the minaret of the fourteenth-century Ulu Cami (Great Mosque) or the goats grazing near the fifteenth-century Zeynel Bey Tomb, a squat cylinder dotted with rich blue tiles.

In the evening, as an afternoon shower cleared, leaving a rainbow arcing across the sky, we crossed to the other side of the river, where we had been invited to a local home for dinner. Inside the house, the family’s oldest daughter, 17, quickly covered her hair and then spread a laminated floral-printed sheet on the front-room floor. With her curious young siblings creeping in and out of the room, she laid out trays of bulgur topped with fried eggs, bowls of pasta with tomato sauce and mint, slices of cucumbers and tomatoes, and mugs of fresh, thin ayran. A baby in a cradle in the corner of the room slept through it all.

The next morning we again rose early to head into the hills, stopping to gaze out to the horizon, where straight rows of small houses were sprouting in a small patch of green amid the dry, brown foothills – one of the new settlements being built for people displaced by the dam. Turning away from what may very well be Hasankeyf’s future, we looked back into town, where we could see its rich past – its mosques, tombs, cave houses, and cliff staircases – grown small and distant behind us.

[BOX] Travel Basics
Buses run regularly (though not too late in the day) to Hasankeyf from Batman and Diyarbakır, where the two closest airports are located. Accommodations and facilities for travellers are modest but sufficient for a few days’ stay.

Hasankeyf Hasbahçe (www.hasankeyfhasbahce.com; 0488 381 26 74) is the town’s best lodging option, with basic but neat motel-style rooms, a picnic area and a shaded garden. For dinner, order a pan-cooked alabalık (trout) from the hotel’s own pond. Hasankeyf Ögretmenevi (0488 381 27 20), a state-run teacher’s house, accepts non-educators if it has any free rooms.

Fuel up for a hike with a hearty breakfast of fresh-baked bread, eggs, cheese, olives and smoky mercimek (lentil) soup with pungent isot biber (pepper) at Nehir Lokantası, a restaurant on the main road run by a friendly husband-and-wife team.

[BOX] The Ilısu Dam
First proposed in the 1950s, construction on the Ilısu Dam started in spring 2008 but was halted just over a year later when German, Austrian and Swiss funders pulled out of the project, citing environmental and human rights concerns. The Turkish government is now pushing ahead with the project on its own.

If completed, the dam would destroy 400 kilometres of the Tigris River and its tributaries, forcing the relocation of 60,000 people from some 200 settlements in the region and drowning habitat for dozens of endemic species in addition to Hasankeyf’s archaeological treasures. Ongoing protests against the project have been joined by celebrities including Nobel Prize-winning author Orhan Pamuk, acclaimed film director Fatih Akın and pop stars Sezen Aksu and Tarkan.

This article was originally published in the October 2011 issue of Time Out Istanbul magazine.
time out istanbul travel