Showing posts from June, 2009
Show all

Bright ideas from the 'Dark Ages' 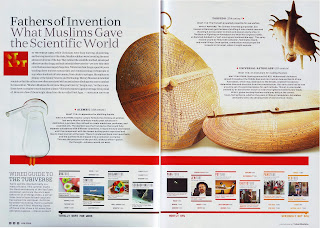 Stumbling across a short news item last summer about the opening of an " Islamic Science and Technology Historical Museum " in Istanbul's Gülhane Park led me deep into the history of the Muslim world in the Middle Ages -- and led to an assignment for Wired magazine to write about some of the invaluable scientific discoveries that date to that era. Read my article, “ Fathers of Invention: What Muslims Gave the Scientific World ,” on Wired 's website, or download a jpg or pdf version as it appeared in the magazine's June 2009 issue.
Read more
More posts