- March 23, 2009
I spent the past week at the 5th World Water Forum, held here in Istanbul this year, attending sessions on traditional cultural uses of water, migration and conflict, and women's issues, among other topics that jumped out from the thick catalog of panels and presentations.

It was a productive week, as I filed daily dispatches from the conference for TreeHugger.com and wrote my first piece for The National, an excellent English-language newspaper based in Abu Dhabi.

My complete conference coverage for TreeHugger:

UPDATE: The article I wrote for The National is no longer available on their website, but you can read it after the jump.

Originally published in The National, 21 March 2009

ISTANBUL // In the rural areas near Edéa, Cameroon, women leave home before dawn, walking for two or three hours to fetch water, a journey they make again each evening. Carrying the heavy loads on their heads, and sometimes their babies on their backs, they endure searing heat and difficult terrain.

“Our country is so hot, and sometimes the roads are slippery,” said Ndjebet Cécile.

“Women have to go over hills and through forests, where they sometimes get bitten by snakes.” Girls often make the trip too, arriving late to school if they get there at all. 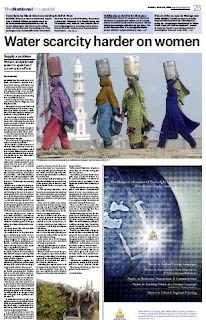 In the Congo, and other conflict areas, it is not snakebites women fear as they trek along the deserted roads in search of water, but rape from marauding rebels.

Women in towns lucky enough to have public water pumps face fewer dangers, but save little, if any, time.

“I see them queuing for hours, from five in the morning to 10 at night,” Cécile said.

“There are not enough pumps, so women come from all over.”

Reema Walia, a masters student at the University of Pennsylvania, has calculated that 150 million work days and 10 billion rupees (about $200 million) are lost annually in India because women must walk up to nine kilometers each day to get water.

Water is a universal need and right, but traditional cultural roles mean that the lack of it affects women and girls more severely than men.

Women have traditionally been the caretakers of water, they collect it, cook with it and bathe children with it, and subsequently deal with the consequences of those who become sick through consuming dirty water.

With water scarcity becoming an ever more urgent issue – the UN says nearly half of the world’s population will be living in areas of acute water shortage by 2030 – the role of water in protecting and managing the resources has taken center stage.

At the World Water Forum in Istanbul this week, where more than 20,000 people gathered to discuss the looming crisis, women were tapped as one of nine major groups crucial to the conservation of water.

“We are talking about survival in a crisis situation,” said Kusum Athukorala, the chair of NetWwater Sri Lanka, a women’s organization. “Women could be agents of change if they are allowed to reach their potential.”

In many countries, that possibility still seems remote.

In rural areas of Turkey, for example, traditional agriculture is usually carried out by women—in the Aegean region, 75 to 80 percent of people working in agriculture are female—but they generally lack decision-making power, often working as unpaid family labor.

The situation is similar in Sri Lanka, where “women have a traditionally defined support role in paddy farming,” said Badra Kamaladasa, an irrigation engineer.

“Women are now assuming heavier duties, preparing the land for harvest, and sharing in the family economic burden,” said Kamaladasa. “But men still own the land and make the decisions.”

The forum was also expected to promote investment in improving water supplies, but critics said this was tantamount to selling water to the highest bidder and would have an adverse effect on the poor. They are calling for more public-sector investment.

“It is only possible to solve the problems if you accept access to water as a human right that cannot be sold. The World Water Forum does not.”

Members of EcoMujer and other international non-governmental organizations were in Istanbul this week too, a few to attend the water forum, but most to organize protests and participate in the Alternative Water Forum being held this weekend just down the road from the big event.

Some 300 people protesting outside the World Water Forum venue on its opening day on Monday were blasted with water cannons and tear gas.

At the opening ceremony a few hours later, two protesters working for International Rivers held up a banner reading “No Risky Dams.” They were detained, and promptly deported.

Dams are a sensitive issue in the forum’s host country, Turkey. In his opening-day speech, Veysel Eroğlu, the environment and forestry minister, called building dams “an absolute necessity” for Turkey.

But the 1.2 billion-euro (Dh 5.7bn) Ilısu Dam project on the Tigris River in southeastern Turkey is the subject of much controversy, as it would submerge part of the ancient town of Hasankeyf and force relocations.

Women forced to migrate as a result of dams often fare poorly, possessing few of the skills necessary to cope with city living.

Many urban areas in developing countries have acute sanitation and hygiene problems.

Though problematic to everyone, such conditions again hit women especially hard.

According to a report sponsored by UNICEF and the Gender and Water Alliance (GWA), more than 50 percent of girls in rural Pakistan drop out because their schools lack proper toilets.

Girls in rural Tajikistan skip class when they are menstruating, for the same reasons.

“Sometimes parents don’t allow girls to go to school if there are no private facilities,” says Mariet Verhoef-Cohen, president of Soroptimist International of Europe (SI/E).

“Sanitation blocks” sponsored by SI/E in rural Ghana and in Nairobi slums provide one solution, containing private toilet and shower facilities with safe water sources, sometimes even a place to do laundry, and generating cleaning and administrative jobs for women.

They are often also a place for women to learn about hygiene and sanitation, knowledge that they take home to their families.

While such projects show the importance of considering women’s special water-related needs, others tap their unique knowledge and skills. The UNICEF/GWA report gives a telling example from Tanzania, where a new well created by an aid agency quickly dried up.

Follow-up visits to the village revealed that the committee that determined the location of the well had been comprised only of men, though women are usually the ones digging by hand for water in scarce conditions – and thus the ones who know where the most water flows.

Women have been shown to be better water caretakers than men, and, when given the tools, able to transfer their household-management skills to the community level.

“Women are suffering too much to get water, so they care very much how it is used,” said Cécile. “They know, ‘If I misuse it, I have to go back and fetch more.’”
environment the national treehugger